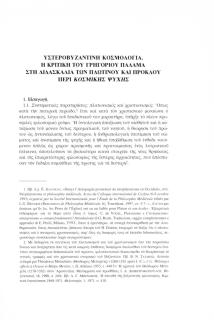 2001 (EN)
Υστεροβυζαντινή κοσμολογία. Η κριτική του Γρηγορίου Παλαμά στη διδασκαλία του Πλωτίνου και Πρόκλου περί κοσμικής ψυχής
Δημητρακόπουλος, Ι. Α.
Gregory Palamas (1296-1359) was a strong opponent of «Greek» philosophers such as Socrates, Plato, Plotinus and Proclus, whom he regarded as «κακοδαίμονας», i.e. possessed by wicked demons, who made their minds full of blatantly foolish doctrines. In the Capita 150 (ch. 3-8), written in 1347-48, Palamas briefly expounds and vehemently refutes the Neoplatonic doctrine of the «World Soul» as the mover of the sensible world. The terms in which he describes this doctrine indicates that he had in his mind Plotinus' Enneads II, 1 and II, 2 as well as particular passages from Proclus' Elements of Theology and Platonic Theology. The 1st Part of this study explains the twofold attitude of the Greek Patristic and Byzantine Christianity towards Plotinus; as much as Plotinus΄ ideas are idealist, theistic and dualist, they were put to the service of the Christian theology, whereas as much as they diverge from Christian doctrines such as the uniqueness of God and the simultaneity of the human soul with the human body they were explicitly rejected. Following the later attitude Palamas sets forth three arguments against the doctrine of the «World Soul», which are apparently directed against the cosmology of the Enneads II, 1 and II, 2: a) if the «World Soul» were the cause of the motion of the sensible world, we should see moving not only the firy heavens but also the lower spheres of air, water and earth, that is the entire universe; since, however, this is not the case, one should search for a purely natural cause of the motion of the heavens, namely, the nature of its element, i.e. To this we should note the Palamas fails to take into consideration that, according to Plotinus, the moving power of the «World Soul» impacts on the various parts of the universe not uniformly but according to their particular nature; b) if a soul were the cause of the motion of the sensible world, this soul should be either rational or irrational. If the former were true, the world should be moved in various ways, according to the free will of the rational being that would stand as its mover; this, however, proves to be false by the stability of the heavenly motions. If the latter were true, how would Plotinus explain the rationality of the human soul? To this we should take exception that Plotinus' «World Soul» is unambiguously rational and that Palamas should not demand on Plotinus to ascribe to the rationality of the «World Soul» a defect of the rationality of an inferior soul such as ours, namely, instabiltiy and mutability. Palamas' 3rd argument, which is to be expounded in the 2nd Part, is connected with his purely cosmological views, which he borrowed directly from the cosmology and physics of Nicephorus Blemmydes' Epitome physica. Blemmydes' and Palamas' views on the relation of God and world with place, time and void are examined and shown to be preponderantly Stoic. The historical as well as systematical reasons why these Christian thinkers abandonded the traditional alliance of their religion with Platonism and turned themselves towards Stoicism are detected, too.
Επετηρίδα
Πλωτίνος
Γρηγόριος Παλαμάς
Πρόκλος
Κόσμος
Κοσμολογία
Ψυχή
Νεοπλατωνισμός
Academy of Athens
Research Centre for Greek Philosophy
2001
Text
Greek
English