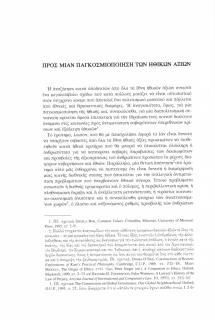 2003 (EL)
Προς μίαν παγκοσμιοποίηση των ηθικών αξιών
Μαρκεζίνης , Κ. Γ.
The search for common values universally upheld is of critical importance in our contemporary society, especially regarding an attempt of the latter to reach a global agreement on how to deal with severe afflictions that surpass a nation΄s borders and to form common moral standards forjudging the violation of human rights around the world. This task of widespread acceptance of moral values is becoming extremely difficult in our multinational, multicultural and multireligious world. A theoretical-deontological approach is offered by A. Gewirth who mentions that it is indeed possible to find compatible moralities with a normative guidance for human actions universally, as there are certain values grounded in a basic human need that is inherent in the human nature of all human beings - the need for successful action. Constituting essential preconditions of a successful action, these values of freedom and well-being ought to be respected by every human being who acknowledges each person΄s need to pursuit his/her interests by being able to act purposively and successfully. Moreover, Locke emphasizes the vital importance of speech not just as a mere expression but as a foundation of our moral nature, and, consequently, according to A. Baier, as a foundation of our fundamental right to a fair hearing. The social capacity of speech empowers the individual to use his/her reason to protest against, to defend himself/herself, to assert, to say no, fulfilling in this way the right to speak, and to be heard, expressing in this way what he/she wants. So, every human being as a speaker, acknowledges in the other human beings as speakers the values and rights concerning the use of language. A. Baier, based on this assertive power of language and reason, acknowledges some other - beyond the mere use of language - vital rights that are grounded in other cooperative practices, as the right of subsistence, of literacy, of employment etc. The whole idea that lies beyond this argumentation is to suggest that the rights of freedom, the economic and social rights spring from the capacity of speech and successful action that are inherent in the human nature shared by all people, acquiring, in this way, a normative guidance for the human behaviour. However, a more empirical approach implies that the concept of right presupposes an autonomous individual that functions within the institutions of post-industrial, capitalist and democratic society that cannot, therefore, be applicable to the Eastern civilization. D. Little, though, mentions that an understanding of the revolutions of Eastern Europe and Ex Soviet Union presupposes an understanding of the language and classifications of human rights. In this vein, A. Donagan suggests that it is possible for people from different cultures to accept common values in the near future, under the condition that the Socialist and Third - World countries would adopt the economic systems of free-market. From a transcendental point of view, Kant recognizes in the human Nature the power of reason that urges the human being to create a Community of Nations with universally accepted moral principles, with the ultimate purpose of fully developing his/her natural capacities. Kant implies a secret programme in Nature that ascribes an a priori guiding meaning to the human history. Therefore, there is a prospect for a common morality.
Επετηρίδα
Αξία
Ηθική
Παγκοσμιοποίηση
Ακαδημία Αθηνών
Κέντρον Ερεύνης Ελληνικής Φιλοσοφίας (ΚΕΕΦ)
Άρθρα του περιοδικού "Φιλοσοφία"
2003
Κείμενο/PDF
Ελληνική γλώσσα
Αγγλική γλώσσα