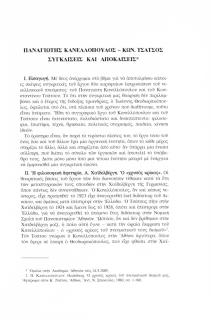 2006 (EL)
Παναγιώτης Κανελλόπουλος-Κωνσταντίνος Τσάτσος. Συγκλίσεις και αποκλίσεις
Καράσης , Μαριάνος Δ.
Both the literary works of K. Tsatsos and P. Kanellopoulos are exhaustive and multidimensional. Yet, despite their vast breadth, they feature an organic unity that enables their comparative review. The philosophical thinking of both intellectuals developed during their post graduate study years in Heidelberg Germany (in the twenties) where two philosophical trends prevailed: neokantism represented by Rickert and existentialism that was introduced and supported by Jaspers. Those two trends were contradictory. K. Tsatsos studied under Rickert and followed his teaching. P. Kanellopoulos followed the other movement. Yet, none of them remained a faithful supporter. Each developed his own philosophical and spiritual personality according to his particular temperament. K. Tsatsos was a systematic philosopher, like Rickert, however not antimeta- physical as Rickert was. He incepted the Kantian philosophy, the philosophical system and theory of values of Rickert and in parallel, Plato΄s metaphysical theory of ideas and partly, the Hegelian dialectic. Based on these influences, he created a new philosophical theory that he further used as a cognitive base to build two more special purely idealistic systems: the philosophy of law, on the one hand and the philosophy of art on the other. Kanellopoulos belongs to the opposite existentialism movement. He developed his own work in three fields outside the environment of intellectualism and scientific rationalism: sociology, history and metaphysics. In sociology, he was mainly influenced by Wilhelm Dilthey, Georg Simmel and Alfred Weber. His historical work is enormous, the most remarkable being his 11-volume "History of the European Spirit". For Kanellopoulos, In the beginning was History and not Logos. Unlike Tsatsos, Kanellopoulos is not a rational mind but rather a historical mind, a historical conscience. He applies in history the same method he had accepted for his Sociology: Dilthey΄s "Verstehen" method. In his metaphysics too, Kanellopoulos is not an intellectualist. He developed metaphysics with a religious dimension equivalent to a supreme inner freedom that is not subject to rational verification or disproof. For him, the superior philosophical function of the mind is doubt and in order to be legitimated doubt must resist to the advocate diaboli rationale. It is an original metaphysics within the existentialist movement. Tsatsos and Kanellopoulos are opposite natures. For Tsatsos, the classical element has the priority while for Kanellopoulos the romantic element prevails. Nevertheless, these elements converge at three levels: at the level of philosophical reflection, of poetry and of political action. In the philosophical reflection, the conversion manifests itself in the great question of relation between Hellenism and Christianism, yet in different manners. There is also conversion in poetry although in a particular manner: in spite of his romanticism, Kanellopoulos writes rhymes dominated by a rational, plastic attribute; in spite of his classicism, Tsatsos writes rhymes that give recourse to his existentialist anguish. In politics, they keep pace with each other again with opposite natures: Tsatsos is impelled into politics by the sense of "duty", while Kanellopoulos by his very own soul, his existentialist make that was substantially tragic. Despite their profound differences, the two intellectuals were fellow travellers rather than rivals. Heidelberg, their spiritual cradle, represents - according to Kanellopoulos - the "golden link of their spiritual bond". This firstly consists in the awareness that the opposite tendencies each one of them expresses are not irreconcilable but that they basically converge in a superior unity (principle of harmony of opposites) and secondly in the awareness of their pedagogical mission. Tsatsos and Kanellopoulos belong to the tradition of the Great Masters of Neohellenism.
Επετηρίδα
Κωνσταντίνος Τσάτσος
Παναγιώτης Κανελλόπουλος
Υπαρξισμός
Ιστορία
Κοινωνιολογία
Συστηματική Φιλοσοφία
Πολιτική
Τέχνη
Ακαδημία Αθηνών
Κέντρον Ερεύνης Ελληνικής Φιλοσοφίας (ΚΕΕΦ)
Άρθρα του περιοδικού "Φιλοσοφία"
2006
Κείμενο/PDF
Ελληνική γλώσσα
Αγγλική γλώσσα