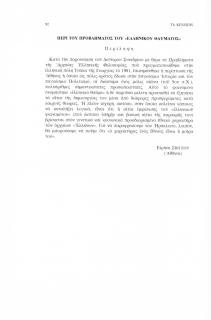 2006 (EL)
Η εκστατική στιγμή του Εξαίφνης
Ράγκος , Σπυρίδων Ι.
In Pre-Sophistic thought philosophers like Parmenides and Empedocles believed that the human mind can, in certain cases, fully grasp the truth about the causes and principles of the world. This belief counterbalances the tragic pessimism of the classical era and the already Homeric, and widely popular, distinction between the gods who know and the ignorant mortals. Plato and the school of philosophical enquiry which his thought initiated reverted to the same belief after the parenthesis of Sophistic and Socratic agnosticism. The postulation of Forms is an attempt, among other things, to secure the possibility of human ascent to the ultimate causes of reality. The present paper is a very limited enquiry into Platonic epistemology. It focuses almost exclusively on the notion of εξαίφνης («all of a sudden») which features prominently in the Symposium, and explores the significance of this notion in this work within the wider context provided by other Platonic dialogues, notably by the Republic and the Parmenides. The so-called «epistemological digression» of the Seventh Letter is also taken into account and analysed. The hotly debated issue of its authenticity is not discussed, since the paper does not aim at a historical delimitation of what Plato personally thought or taught. It, rather, seeks to find out the kind of epistemological optimism that Plato΄s thought established in the philosophical tradition of antiquity. To this end both Aristotle and Plotinus are brought as witnesses. They both seem to have subscribed to the view that the properly trained human mind can, in some rare cases, attain to a kind of knowledge that is the eternal prerogative of things divine. Such an illumination of the human mind occurs as an unexpected, i.e. sudden, experience of a very intimate kind. Both the experience itself and its contents are not propositional, although they may subsequently be described in linguistic terms, in an always inadequate manner. This is the sense in which ultimate truth is, in the Platonic tradition, ineffable. Plotinus΄ mysticism stresses the luminous character and the formless «content» of the experience. The first Neoplatonist also emphasizes the unforeseenable moment of the experience by regarding patience as a necessary virtue for the accomplishment of the ultimate goal of life, which to his mind is nothing less than ecstatic unity with the very first god, the One. Already in Plato, the nature of the moment in which illumination occurs is the object of an enquiry conducted within the well-known opposition of time and eternity. In the third hypothesis of the Parmenides Plato thought that the εξαίφ¬νης moment acts as a link between the eternal reality of Forms, which is always at rest, and the temporal reality of events in the domain of perceptible things, which is always in motion. A similar view can be found in Aristotle. As the other side of the timeless present (νυν) which links the before with the after, the εξαίφνης is, to his mind, time΄s exit from its continuous self, a sudden leap outside continuity caused by the temporal movement itself. Beginning with Plotinus the reappropriation of Plato΄s thought which goes under the name of Neoplatonism unanimously regarded the third hypothesis of the Parmenides as referring to the hypostasis of the Soul, the principle that mediates between, and eo ipso keeps distinct, the intelligible and perceptible realms. By taking on board all the relevant evidence concerning the ecstatic moment of illumination the paper concludes that the Platonic tradition understood the εξαίφνης, in a more or less objective manner, as the fissure which timeless eternity causes to the temporal sequence of empirical events, a fissure which brings with it the entire intelligible world but which becomes perceptible only to people well-trained in philosophical investigation. It is at such moments that the human mind gets permeated by knowledge of true reality, and it is at such moments that authentic well-being, in the sense of Greek eudaemonia, is attained.
Επετηρίδα
Πλατωνική Φιλοσοφία
Ιστορία της Φιλοσοφίας
Έκσταση
Γνώση
Θεωρία των ιδεών
Επιστήμη
Ακαδημία Αθηνών
Κέντρον Ερεύνης Ελληνικής Φιλοσοφίας (ΚΕΕΦ)
Άρθρα του περιοδικού "Φιλοσοφία"
2006
Κείμενο/PDF
Ελληνική γλώσσα
Αγγλική γλώσσα