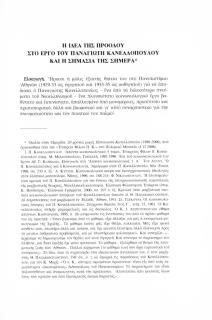 2007 (EN)
Η ιδέα της προόδου στο έργο του Παναγιώτη Κανελλόπουλου και η σημασία της σήμερα
Καράσης , Μαριάνος Δ.
One of the central themes in the sociological theory of P. Kanellopoulos is the issue of historical progress. Kanellopoulos is the first to define the concept of progress, differentiating it from the concept of evolution. He distinguishes the two concepts beginning from the epistemological distinction between nature and history. Evolution refers to nature, and it is connected to the biological process, which occurs in accordance with the natural laws. Progress refers to history, and it is connected to the historical process, which occurs in accordance with the particular historical laws. Progress is the emancipation of man from the barriers of the species and of nature in general; the tendency for continuously greater liberation from the bonds of nature. Kanellopoulos differentiates between progress as a historical event and the awareness (the «idea») of progress. Progress as a historical event has existed since the emergence of historical society. But it took man a long time to become aware of this fact. The «idea» of progress came much later, in the modem era, from 18th century thinkers, from the influence of empiricism and enlightenment, taking occasion from the brilliant achievements of the natural sciences and engineering. These progresses created the belief that all things necessarily follow an upward course towards a better state: from ignorance to knowledge, from delusion to truth, from darkness to light, from work to freedom. Hence was shaped the idea of universal progress, which, however, led spirits to excesses. These excesses were expressed at the sociological level as well, in the form of novel theories about progress. Among those are the theories of August Comte, of Herbert Spencer, of Marx and the Marxists, of Kant, Hegel, and others. These theories, each departing from a different philosophical starting point, all accept the existence of historical progress. Kanellopoulos doubts these theories, as well as the opposing ones which deny the existence of progress, and formulates a theory of his own. Based on his own epistemological starting point, he defines two cultural spheres: one that is governed by the reasonable and social elements of human actions, and one where purely individual elements prevail. The first cultural sphere is defined as «technical culture» (zivilisation), whereas the second sphere is defined as «intellectual culture» (Kultur). Kanellopoulos accepts that progress exists only within the framework of the «technical culture». Of particular significance is the refutation, by Kanellopoulos, of the social Darwinism theory of progress - that is, that the laws of biological evolution define social behavior, and hence they also dictate social progress, as well as his refutation of the Enlightenment theory of progress - that through rationalism, science, and technology, man will certainly attain happiness.
Επετηρίδα
Παναγιώτης Κανελλόπουλος
Πρόοδος
Γενική Φιλοσοφία
Academy of Athens
Research Centre for Greek Philosophy
2007
Text
Greek
English