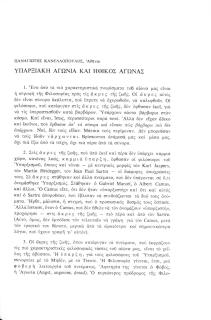 1971 (EN)
Υπαρξιακή αγωνία και ηθικός αγώνας
Κανελλόπουλος , Παναγιώτης
One of the main characteristics of our century is the turn of Philosophy towards the outer limits of life, beyond which there is no land, no existence. These limits were reached by the philosophers of existentialism (Karl Jaspers, Martin Heidegger, Jean-Paul Sartre) or of parallel trends (Gabriel Marcel, Albert Camus) who came after their forerunners of the 19th century, Kiergegaard, Nietzsche and the artist Van Gogh, and in our century Franz Kafka. Existence for them borders on nothingness-is to be found on the brink of the abyss. Philosophy becomes a terrible function of the spirit. Dread becomes its starting point. Not the fear of death, which has never frightened the true philosopher. The starting point of the most characteristic philosophy of our times is Nothingness in life itself, in one' s very existence. The fear which is caused by the suspicion or the certainty that the world exists only through nothingness brings to impasses human existence, man΄s relation to himself and his communication with his fellow men, which confirms the existence of his own self. The impasse reveals itself as a shipwreck. Existence does not sink in the ocean of death; it sinks in its own self. It destroys itself on the reef which is its own foundation. This reef - this foundation - is Nothingness. Never was anxiety, dread, such an immediate motive for philosophical speculation as in our century. Never has the great void become so directly and shatteringly palpable as it became after Positivism, after Historical Materialism, after Freud, after the overturning of the classical Newtonian mechanics of the Universe. In the very century of the greatest achievements and successes of science and technology, the philosophy of failure, «shipwreck», was developed and spread. A terrible suspicion hovers around us (within us), the suspicion that the world, for all the conquests of science and technology, does not grow larger but in fact shrinks, that the space within which man breathes does not expand but actually narrows more and more. The more sensitive conductors of suffocation, which appear to be upon us, reminisce upon what is about to be lost for ever. If we examine more carefully what has been said by the existentialists we shall realise that they are possessed deep inside themselves by a nostalgia for life. Camus has confessed this nostalgia. The philosophical explorers of the icy «polar» wastes of life are not only possessed by nostalgia for the simple, warm, very human life, but also by the passion for moral - political - action. Existential dread confronted by the abyss of the void was transformed in their hearts into moral terror and active resistance in the face of the dreadful fate of men in our century within the arms of life itself. In our century great hopes for general happiness have been based on the preachings of «millennial» ideologies, surrogate religions. But what has our century, which should have been, according to these preachings and promises, at least the century of progressively decreasing unhappiness, revealed ? Never before have violence, bloodshed, the ill-treatment of the human being, calamities, catastrophies reached the proportions they assumed in our cen¬tury. Thus the existential dread of philosophers and artists also expressed itself as moral terror for the awful fate of the human being. Jaspers transmuted this terror within himself into a moral imperative which, after 1945, made him raise his voice as a great pedagogue and political mind. This was also done by Sartre and Camus, though in other ways. At the onset they walked in step. Since 1951 their ways have parted. But they both continued to combine their philosophy with moral and political action. The philosophers who reached the brink of the abyss, the borders of life, also turn to life in our terrible century with the will to struggle, to save whatever can be saved. They did not confine themselves within their philosophical laboratories, nor did they withdraw into the desert. Their metaphysical or existential dread became moral action and moral struggle.Through their ethical attitude they returned to the eternal tradition of philosophy which, during its great moments from the times of Ancient Greece to this day, was never «without politics and political consequences», as Jaspers said.
Επετηρίδα
Jean-Paul Sartre
Υπαρξισμός
Albert Camus
Ηθική
Franz Kafka
Karl Jaspers
Martin Heidegger
Συστηματική Φιλοσοφία
Gabriel Marcel
Academy of Athens
Research Centre for Greek Philosophy
1971
Text
Greek
English