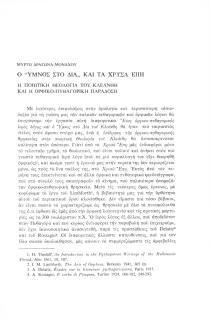 1971 (EL)
Ο «Ύμνος στο Δία» και τα Χρυσά έπη. Η ποιητική Θεολογία του Κλεάνθη και η ορφικο-πυθαγορική παράδοση
Δραγώνα - Μονάχου , Μυρτώ
The purpose of this paper is to point out certain striking similarities observed between Cleanthes' Hymn to Zeus (lines 4,17,23-24,30) and the Golden Verses (lines 50-63) ; and on the basis of tenuous evidence to attempt to construct a reasonable hypothesis for their explanation. The investigation into the relationship of these two poems seemed worth undertaking not only in itself, but because by virtue of this and other relevant pythagorean and orphic texts it can provide a clue to the reconstruction of some corrupt verses of the Hymn and offer new appropriate readings. It has also been attempted with the intention of approaching stoic Theology to the orphico-pythagorean tradition in general and of marking the influence that the latter exercised on the former in addition to that of Heraclitus and other philosophical and medical schools predating Stoicism. By orphico-pythagorean tradition we mainly mean the corpus of religious poetry in circulation from the 4th century onwards, fathered on Orpheus and Pythagoras, without discussing here whether it was the case of a religion or not. The close parallels of the above mentioned poems which first motivated this investigation range from identical words and similar expressions to like patterns of thought. Since such likenesses cannot be sufficiently explained either as stylistic elements or as an imitation by the younger poet of the elder owing chiefly to the controversy over the date of the G.V., the only reasonable accounting for the similarities is that both copied a prototype. Since this holds true with regard to the «compiler» of the verses (who is generally held to have incorporated older material, i.e. an ancient Pythagorean Ιερός λόγος, known also in an orphic version) we argue on the basis of what we know from Cleanthes' technique concerning his «Prayer to Zeus and Destiny» that this is the case with Cleanthes also; i.e. that he was influenced by the religious poem which constitutes the kernel of the G.V. Not only did Cleanthes utilaze old poetry but the other Stoics also are reported to have used Homer, Hesiod, Euripides, Orpheus, Mousaios. Orphic and pythagorean religious poetry was always confused and even Pythagoras is said to have consecrated his poetry,and in particular his hieros logos, under the name of Orpheus. Thus it is not unlikely that Cleanthes may have indulged in pythagorean religious poetry too, when he is said to alter (π|αραδιορθώνειν) the poetry of Orpheus. Moreover we know that Zeno wrote Pythagorica, and Cleanthes scrutinized Pythagoras' genealogy. He yet held doctrines in common with Oinopides and other Pythagoreans, and the important role of the sun in his philosophy is explained as orphico- pythagorean influence. The same influence is attested concerning his allegorical interpretations of Apollo and the doctrine of the harmony of the spheres. That the Stoics may have had in their possession a collection of Pythagorean precepts certifies the fact that Chrysippus employed a line of the ancient hieros logos found also in the Golden Verses known in this time simply as Pythagorean (SVF 2, 1000). This line is found in the Golden Verses in a context (1.54) similar to that of the hymn (1.17), i.e. Theodicy. It is all but probable that Crysippus was acquainted with a greater part of it and he is believed by some scholars to have taken from it his simile of cy1iηder. Cleanthes as a poet ought to have been greatly interested in it and, given the mystical flavour of his nature, it is not improbable that he may have used some lines of it, besides other large-scale borrowings, and for all the certain originality of his hymn, the most substantial token of stoic piety. Though the contents and form of this ancient hieros logos is not yet successfully reconstructed, it is possible to get to know the main line of it from both Diogenes Laertius and Iamblichus. As an intermediate text between the ancient logos and the hymn,we see the platonic passage Laws 4, 715 e-717a, which is designated as παλαιός λόγος, a term equivalent to Ιερός, and which holds many aspects in common with both the hymn and the Golden Verses; it moreover contains the famous orphic verse (21 Kern) we know from Plutarch (Comm. Not. 1074 d) the Stoics were accustomed to recite. We also know (and this item of information is not comprised in the collection of Arnim nor was the former either), that the Stoics were initiated into certain mysteries. In connecting the Hymn of Cleanthes with the Golden Verses and the other cognate pythagorean and orphic texts we think we are entitled to suggest the following readings : Line 30: <Oι δέ κύλινδροι (δ΄) ώστε> επ' άλλοτε δ' άλλα φέρονται (from line 57-58 of the G.V.). Line 11 : του γάρ υπό πληγης φύσεως πάντ' έργα (τέτυκται) (from the orphic verse 21 Kern). Line 4 : εκ σου γάρ γένος εισί (λόγου σύστημα) λαχόντες (λαβόντες) (from Archytas by Iamblichus' Protr. 18, 28 Pist.). If we are right in working out our hypothesis, the juxtaposition of the Hymn of Cleanthes to the Golden Verses has yielded important results.
Επετηρίδα
Θεολογία
Ιστορία της Φιλοσοφίας
Πυθαγόρειοι
Ορφική Φιλοσοφία
Χρυσά έπη
Κλεάνθης
Ακαδημία Αθηνών
Κέντρον Ερεύνης Ελληνικής Φιλοσοφίας (ΚΕΕΦ)
Άρθρα του περιοδικού "Φιλοσοφία"
1971
Κείμενο/PDF
Ελληνική γλώσσα
Αγγλική γλώσσα