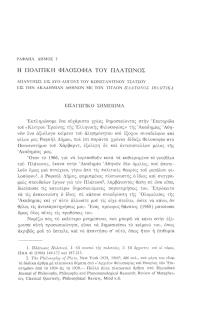 1973 (EL)
Η Πολιτική Φιλοσοφία του Πλάτωνος. Απάντησις εις δύο λόγους του Κ. Τσάτσου εις την Ακαδημία Αθηνών. Εισαγωγικό σημείωμα και Παρατηρήσεις Κωνσταντίνου Τσάτσου
Δήμος , Ραφαήλ
Apropos of two lectures on Plato's political theory delivered by Mr. C. Tsatsos at the Academy of Athens on the occasion of the celebration of Plato's birthday in 1966, the late Professor Raphael Demos (†1968), corresponding member of the Academy, framed the following main comments: a) To the disparity among the citizens seen in the Republic one can oppose the equality of all immortal souls discerned in Phaedo. b) He disagrees with the lack of toleration and the restriction of the artistic freedom prescribed by Plato in the Republic. c) He also objects to the abolition of individual property, invoking the well-known Aristotelian arguments. d) He is generally opposed to the absolute absorption of the individual by the community, i.e. the State, wondering whether, according to Plato himself, the individual enjoyed an independent, self-reliant life outside the sphere of the State, a view also reinforced by Christian thought. In the sequel Mr. C. Tsatsos gives a reply to the above mentioned remarks. He lays stress upon the fact that in these lectures he is not actually advancing his own personal theories, but those of Plato; he also claims that it is not possible to render Plato full justice, if it has not been taken into consideration that his State was not conceived as a scheme realizable in the world of history. It constitutes a model, an idea based upon the impossible assumption that there are men within the State who entirely incarnate Reason (λόγος). This having been assumed, all constitutions relevant to the articulation of the State, such as Education and Art, take on a meaning entirely differing from the ordinary. Thus, within the world of ideas, as exemplified by the ideal rulers of the State, there is room for both the right – according to reason – religion, and the right – in accordance with reason – art. Nor is there any injustice or any restriction of freedom either, as each man is properly placed where he can develop all his capacities to the full, in complete harmony with all his fellow-men. As far as concerns the Laws, Plato is aiming to formulate a State, which, though not ideal, since the rulers embodying Reason are lacking, is, nevertheless, the closest possible to the ideal. Yet Plato does not believe even this State practicable, as a large concurrence of favourable circumstances would be required for its realization, which is impossible in actual fact. Therefore, from this point of view only the State of the Laws should also be appreciated.
Επετηρίδα
Κωνσταντίνος Τσάτσος
Ιστορία της Φιλοσοφίας
Πλατωνική Φιλοσοφία
Πολιτεία
Πολιτική Φιλοσοφία
Ακαδημία Αθηνών
Κέντρον Ερεύνης Ελληνικής Φιλοσοφίας (ΚΕΕΦ)
Άρθρα του περιοδικού "Φιλοσοφία"
1973
Κείμενο/PDF
Ελληνική γλώσσα
Αγγλική γλώσσα