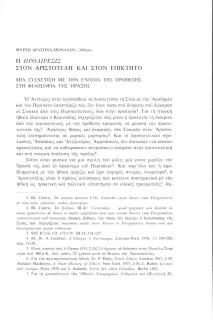 1978 - 1979 (EN)
Η προαίρεσις στον Αριστοτέλη και στον Επίκτητο. Μια συσχέτιση με την έννοια της πρόθεσης στη φιλοσοφία της πράξης
Δραγώνα - Μονάχου , Μυρτώ
It has been argued by eclectics and rivals of Stoicism in late antiquity that the Stoics did not differ greatly from the Peripatetics in doctrine but only in terminology. In Epictetus, however, we find the same term prohairesis used as extensively as in the ethics of Aristotle. The question is whether this term has the same sense and spirit in the two doctrines. Like the term ‘intention’ in the contemporary philosophy of action and the philosophy of mind, prohairesis is one of the trickiest terms in the language of ancient philosophy. It corresponds to ‘intention’ but includes much more. Apart from ‘intention’ in the Aristotelian ethics it is usually translated as ‘choice’, ‘decision’, ‘purpose’, ‘will’, ‘forechoice’, ‘intentional choice’, ‘free choice’, etc., and in Epictetus’ Discourses as ‘moral purpose’, ‘choice’, ‘free will’, ‘moral person’, etc., sometimes through a confusion of meaning and substantial characteristic. The great variety of the translations of the term in both philosophers testifies to a certain obscurity or at least ambiguity of it, and allegedly to an inconsistency on Aristotle’s part according to some scholars. G.E.M. Anscombe, moreover, has curiously maintained that Aristotle failed to realize the importance of the concept of intention, considering his prohairesis (which translates as ‘choice’) a ‘spurious’ term. Yet the analysis of intention in the philosophy of action elucidates some of the obscurities of prohairesis and justifies many of the various renderings of the term within the complex process of deliberation, decision-making and action. Although much has been written on prohairesis, especially as it occurs in Aristotle, little comparative work has been done on its relation to the Epictetian concept. One author (Rist) regards the Epictetian usage as wider than the Aristotelian and speaks of two traditions for the term. As a matter of fact the prohairesis of Epictetus appears wider than Aristotle’s only because the latter n his ex professo account of it in EN 3 restricts prohairesis to choice of means leading to a given end. Aristotle, however, also uses prohairesis in reference to the end in EN 6 and occasionally in the EE, and in a wider, less technical and more ordinary sense, in other contexts of the ethical treatises as well as in other works. Some of these usages, where prohairesis denotes inner disposition, moral character, moral principle, motive, purpose, free choice, etc., are quite comparable to some of the senses in which Epictetus uses the term: inner attitude of mind, rational Self, moral character, region of independence from externals, real Self, free will, etc. It is true that Epictetus places the emphasis on independence; but Aristotle had also distinguished prohairesis form will as choice of things in our power. The basic sense of prohairesis in Aristotle is identified by Couloubaritsis as a kind of essential, or rather existential choice, formed by previous particular choices and accounting for subsequent ones. So Voelke speaks of a primordial, existential choice with regard to the prohairesis of Epictetus; and this is consistent with the Early Stoic definition of prohairesis as hairesis pro haireseos. Thus not only some of the aspects but also the fundamental meaning of this ‘polymorphous’ concept are found to be common to both philosophers. That we cannot so easily speak here of two different traditions of the term is clear, I believe, from Epictetus’ analysis of prohaietikon in Dis. III 18,1. Aristotle’s reduction, moreover, of the part which has prohairesis (το προαιρούμενον) to the leading part of the soul (το ηγούμενον) is not incompatible with Epictetus’ identification of prohairesis with the ηγεμονικόν or with the whole soul. And the former’s statement that “such a principle (a union of desire and intellect) is man” (as the originator of action) recalls Epictetus’ continuous reduction of prohairesis to man himself. Without claiming that Epictetus borrowed this term directly from Aristotle (for he never mentions the latter), I believe that his prohairesis is a natural development but also a transformation of the Aristotelian concept, as adapted to the data and the requirements of late Stoic ethics. Whereas Aristotle often raises the question whether it is prohairesis or action which reveals the character of the agent, and has moral value, in a later era when the realms of creative action become too narrow, Epictetus seems to have voted decisively for prohairesis, making it somewhat more independent of the action which it dictates, and evaluating it more positively than Aristotle. Epictetus’ prohairesis is the answer to the Aristotelian dilemma: prohairesis or action. It is a sort of action in itself.
Επετηρίδα
Αριστοτέλης
Ιστορία της Φιλοσοφίας
Επίκτητος
Στωική Φιλοσοφία
Προαίρεσις
Αριστοτελική Φιλοσοφία
Academy of Athens
Research Centre for Greek Philosophy
1978-1979
Text
Greek
English