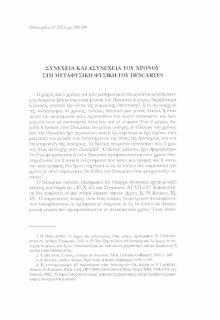 2013 (EN)
Συνέχεια και Aσυνέχεια του Xρόνου στη μεταφυσική φυσική του Descartes
Γρηγοροπούλου , Βασιλική
Descartes evidently recognizes both the continuity and the discontinuity of time. The interpretative approaches concerning the question of time in Descartes are divided between the theses of continuity and the theses of discontinuity. According to the thesis of discontinuity, the independence of the parts of time implies that time is comprised of «a repetition of indivisible and discontinuous instants» (GUEROULT, Descartes selon l' ordre des raisons, 1968, p. 278). On the other hand there is an assertion of the hypothesis of continuity of time, not only for the body but also for thought (J.- M. BEYSSADE, La philosophie première de Descartes, 1979, pp. 346-350). We begin with clarification of the concepts of duration and instant, which are crucial components of the model of time as presented by Descartes. The hypothesis of discontinuity is formulated without taking into account the distinction between the terms momentum and instant, in effect equating the two. But the model of time is different if it is conceptualized as comprised of instants-intervals that tend to last through time (momentum). Secondly, we will examine the significance of the hypotheses of continuity and discontinuity in relation to the laws of motion of bodies. Thirdly, we will examine the model of time as it pertains to thought. Despite its radical differences from the body, the cogito, too, is subject to the dictates of time, and indeed lasts for as long as «it thinks». In Descartes' mental experiment, where it is shown that a thinking ego is not necessarily something existent and, moreover, that its existence at any given time does not guarantee continued existence an instant later, the duration of something that is thought is both divisible and measurable in time. Nevertheless, the model of time for thought differs from that which applies for bodies. Although the thesis of continuity, active and productive thought is defensible, it is evidently possible for the continuity with which ideas are generated to be interrupted, and even breached, through the introduction of doubt for a start. In brief, although I argue that the interpretative thesis of continuity is stronger, I propose to focus on certain problems with this thesis.
Επετηρίδα
Ιστορία της Φιλοσοφίας
Μεταφυσική
Ασυνεχές
Φυσική
Συνέχεια
Descartes
Χρόνος
Academy of Athens
Research Centre for Greek Philosophy
2013
Text
Greek
English