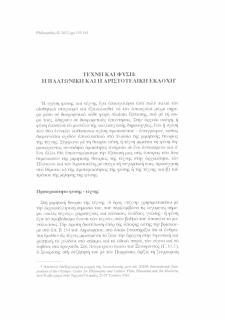 2012 (EL)
Τέχνη και Φύση: η Πλατωνική και η Αριστοτελική εκδοχή
Παρισάκη-Γιανναράκη , Θεόπη
As it is well known, in Greek aesthetic theory art imitates nature by creating resemblances of nature or reality, while the relation between nature and art becomes a relation between copies and originals. The earlier expressions of this theory are to be found in Plato and Aristotle. In this paper, I attempt a comparative approach of their views by focusing: a) on the matter of the priority of nature over art or vice-versa, and b) on the manner of the imitation of nature. In Plato the idea of nature has a negative content, because the objects of the world of sense are copies of the Forms or Ideas which are the only real beings. On the other hand, the works of art are copies of the above copies and, thus, at the third remove from the reality of Forms. In the Republic X, Plato uses the theory of Ideas and his hierarchical conception of reality (ideas, material objects and their images) in order to condemn imitative art as untrue and deceitful. In the Cratylus, it is maintained that the essence of things is known by examining things themselves and not their images, however perfect. Now, according to Plato, works of art are copies -though not completely faithful- of particular things of the world of sense, and, as such, they are deteriorated in relation to their originals both ontologically and epistemologically. In the Laws, the greatest and most beautiful things are done by nature. Art is posterior to nature and has little or no worth. Only useful arts produce something important, since they cooperate with nature for utilitarian purposes. In Aristotle nature and art are considered as equivalent processes and there are analogies between them. Their analogies relate to: a) the relation of matter and form -in both nature and art, form is imposed to matter, b) final causes - both function by final causes, c) aesthetic pleasure - it is derived from the same causes in both. In relation to the manner of imitation, art does not hold a mirror up to nature, as it does in Plato's Republic X. It is not a copy or reproduction of natural objects, because it can create things which do not exist in the actual world necessarily, since they may be imaginary or ideal entities. Art represents not particulars, but the universal which is presupposed in each particular and reveals the essence of things. Aristotle seems to give the precedence to art over nature: art amends nature's defaults and accomplishes its unfulfilled intentions. Moreover, useful arts supplement nature by following its guidance.
Επετηρίδα
Ιστορία της Φιλοσοφίας
Πλατωνική Φιλοσοφία
Αισθητική
Φύση
Αριστοτελική Φιλοσοφία
Τέχνη
Ακαδημία Αθηνών
Κέντρον Ερεύνης Ελληνικής Φιλοσοφίας (ΚΕΕΦ)
Άρθρα του περιοδικού "Φιλοσοφία"
2012
Κείμενο/PDF
Ελληνική γλώσσα
Αγγλική γλώσσα