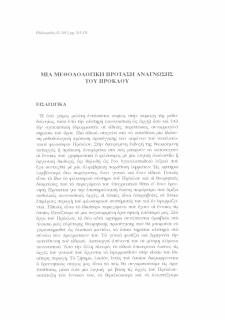 2012 (EL)
Μια μεθοδολογική πρόταση ανάγνωσης του Πρόκλου
Τερέζης , Χρήστος
Γκοζνταρή , Νατάσα
This study aims at formulating a specific methodological proposal on how to approach the texts of the Neoplatonist philosopher Proclus. Viewed initially in its wider aspect, this proposal refers to how the concepts used by the philosopher can be classified in a logical sequence, or instrumental succession, i.e. not as an encyclopedic dictionary composed by means of lemmata in alphabetical order. As a criterion we take two factors into consideration, the one being general and the other being specific. The general one is Proclus' philosophical system itself and the theoretical obligations posited to a researcher by its content in a compulsory way. The specific one is the particular content of the concepts we examine in one of our research projects. The topic within which the aim of our research is formulated is how we would construct the presuppositions throughout a logical classification of Proclus' concepts - based on his own principles - in order to establish and develop a theory about Henology and about Metaphysics. In order to fulfill such a theoretical purpose, we use the method of a somehow generic emanation. We examine, following the classification we select, the degree according to which each prior concept consists in the source of the one which is immediately next. And, reversely, also the degree according to which each posterior concept consists in the emanatory development of its prior one. We attempt to implement this method within the frame of one and the same concept, which, due to its multiple meanings, is classified under many theoretical units and each time receives, or bestows, a specific function of foundations and references during the construction of a scientific syllogism. Our research aim is to show that all the particular meanings of the concept we examine, belong to the same general unit and express its specifications. In other words, that together with itself they construct the relation «one - multitude», which reflects to a large extent what would be defined as a coherent and complete system. The concept we select is ένωσις (unity/union), which expresses the supreme form of coherence in the metaphysical world and the reciprocity which characterizes the entities contained within its frame. This is a concept which Proclus implements on all levels of this world, mainly in order to show that there are no gaps between the conditions which have an absolute identity with themselves and those which are characterized by distinctions and that the latter consist in the developments of the former into inferior ways of existence. Through the study of particular cases of presence of this concept, we will follow the way the Neoplatonist philosopher constructs the metaphysical world, with reference to many levels of contemplation, and formulates in its interior the terms for the production of the world of tangible experience. We would argue that the «unity/union» offers a secure way to comprehend some of the principles selected and implemented by the Head of the Academy, in order to show the structure of his own philosophical system and the more general theoretical aims he wished to realize. Thus, we include the passages where this concept is used into general categories and classify them in a way which depicts the levels of the thought of the Neoplatonist philosopher downwards, i.e. from the superior to the inferior, or from those which are more compulsory to the rest which emanate from them.
Επετηρίδα
Ιστορία της Φιλοσοφίας
Πρόκλος
Νεοπλατωνισμός
Ακαδημία Αθηνών
Κέντρον Ερεύνης Ελληνικής Φιλοσοφίας (ΚΕΕΦ)
Άρθρα του περιοδικού "Φιλοσοφία"
2012
Κείμενο/PDF
Ελληνική γλώσσα
Αγγλική γλώσσα