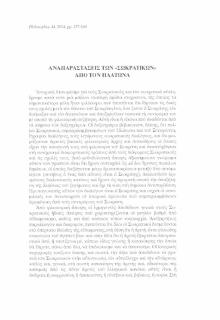 2014 (EL)
Αναπαραστάσεις των «Σωκρατικών» από τον Πλάτωνα
Τσούνα , Βούλα
Historically, when we speak of the Socratics and of the Socratic circle, we have in mind a fairly stable group of thinkers whose most prominent members were philosophers that, after Socrates' death, are alleged to have founded their own schools and who, during Socrates' life, admired and loved him, and regularly sought his company for the purpose of philosophical conversation. This is the picture emerging from the doxographers, who also attest that many Socratics, including Plato and Xenophon, wrote dialogues, the so-called Socratic dialogues, and that they shared a number of core philosophical intuitions and beliefs that have their origin in the philosophy of Socrates and have subsequently been developed by different Socratics and their schools in different ways. However, in this paper, I am not concerned with the historical circle of the Socratics, but with certain interlocutors of Plato's Socrates whom I call 'Socratics' for lack of a better word, without prejudice as to whether Plato might have called them so or thought of them in that way. They are characters represented as interacting with Socrates in different social occasions, geographical locations, and chronological periods. And some of them lend their name to the dialogue in which they appear - a convention followed by many authors of the Socratic circle. So, the scope of my discussion is narrow and confined within the realm of Plato's fiction: I am interested in the way in which Plato represents the aforementioned characters, not in the corresponding individuals themselves. I wish to suggest that there is a striking discrepancy between Plato's picture of the companions of Socrates and the image drawn by the doxographers and developed by modern scholars. While the people that the doxographers call Socratics are mainly Socratic philosophers, namely members of Socrates' circle who are reported to have gone on to write philosophical works and/or to found schools, the people that I call ΄Socratics΄ are members of Socrates' circle who are influenced by Socrates but do not go on to become philosophers or teachers of philosophy. Plato, I contend, typically represents Socrates' conversations with the latter group of personages, not with the former. Moreover, among the most gifted ΄Socratics΄ depicted in Plato's dialogues are two figures conspicuously absent from the majority of historical reconstructions. In Part I of the paper, I argue the case at the level of drama. In Part II, I focus on the philosophical views and tendencies manifest in Plato's Socratic conversations. In Part III, I question the widespread assumption that Plato's representations of Critias and of Alcibiades, brilliant as they may be, nonetheless suggest that neither of these characters was an intimate of Socrates and that neither had a serious interest in Socratic philosophy and method. In Part IV, which is very brief, I speculate on Plato's philosophical motivation for representing the ΄Socratics΄ in the way he does.
Επετηρίδα
Ιστορία της Φιλοσοφίας
Πλατωνική Φιλοσοφία
Αναπαράσταση
Σωκράτης
Πλάτωνας
Σωκρατική Φιλοσοφία
Ακαδημία Αθηνών
Κέντρον Ερεύνης Ελληνικής Φιλοσοφίας (ΚΕΕΦ)
Άρθρα του περιοδικού "Φιλοσοφία"
2014
Κείμενο/PDF
Ελληνική γλώσσα
Αγγλική γλώσσα