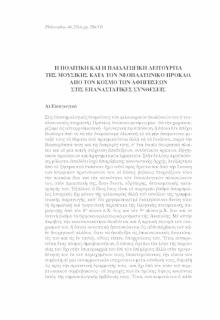 2014 (EL)
Η πολιτική και η παιδαγωγική λειτουργία της Μουσικής κατά τον Νεοπλατωνικό Πρόκλο. Από τον κόσμο των αφηγήσεων στις επαναστατικές συνθέσεις
Τερέζης , Χρήστος
Τσιάμη , Μαρία
Ιn this article we attempt to show that Proclus does not approach music only by means of strictly artistic and aesthetical criteria. Thus, he does not isolate music from the wider human adventure, but he considers that it has the capability to contribute decisively towards the elimination of the personal and social pathological causes and to the significant improvement of the political system, by means of its inclusion in the curriculum. He argues that quality music does not aim so much at the entertainment or amusement of its listeners, but at their deep communication with their own internality and their fertile presence in the collective becoming. Our basis is Proclus' commentary on the Platonic dialogue Alcibiades I, 106 a, which is contained in his Commentary on Plato's Alcibiades I, 193, 25-206, 14. Our study is divided into the following sections: Α. Introduction: here we concisely present the general epistemo- logical principles, by means of which the Neoplatonist philosopher constructs his philosophical system. Β. Music and its self-transcendence: in this section we present the way Proclus incorporates music in his philosophical system, particularly in what relates to the cultural matters in connection with practical Reason. C. The commentary on Alcibiades I as a preamble of the new semantic era: here what is concisely presented is the main, original directions of this treatise of Proclus in the fields of Anthropology, Ethics, Politics and Pedagogy. D. Music as part of the curriculum: according to the relation of music with sciences and gymnastics, what is discussed here is its particular pedagogical character and its implementations concerning the moral and political improvement of the pupil. More generally, the way of transformation of the political system through music in its perspective is also stressed, since it offers the basis for the transcendence of rivalry and the promotion of communication among the citizens. E. Music and the morally worthy: here it is underlined that music positively contributes both to individual ethics and to collective activities, with the latter factor offering substantial space to the former. We can argue that Proclus promotes music in such a way, that it is shown to be a revolutionary power. F. The teleological course of the educational paradigm: the discussion here is about the way music, according to the Neoplatonist philosopher, does not serve an educational system which supplies simple information material, but advances the realisation of the ideal type of man. In any case, however, the specific character of every student as a personality does not become invalid. G. The primary metaphysical dimension of music: in this section it is stressed that, according to Proclus' standard practice, music is presented as established in the metaphysical world. It expresses a type of what is worthy, that of authentic beauty, which contributes to the metaphysical principles becoming an individual and political fact. At the same time, it is the factor which elevates man to the metaphysical archetypes and contributes to his assimilation to the divine. H. Epilogue: as an extension, we formulate a proposal for the co-examination of Proclus' texts about music with the relevant positions of the representatives of the Frankfurt School, mainly those referring to the modern phenomenon of mass culture, within the perspective of transcendence of social pathological causes.
Επετηρίδα
Ιστορία της Φιλοσοφίας
Πλατωνική Φιλοσοφία
Μουσική
Πρόκλος
Πλατωνικοί Διάλογοι
Παιδαγωγική
Αφήγηση
Πλάτωνας
Νεοπλατωνισμός
Πολιτική
Ακαδημία Αθηνών
Κέντρον Ερεύνης Ελληνικής Φιλοσοφίας (ΚΕΕΦ)
Άρθρα του περιοδικού "Φιλοσοφία"
2014
Κείμενο/PDF
Ελληνική γλώσσα
Αγγλική γλώσσα