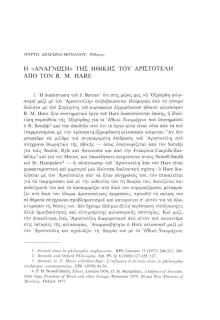 1982 (EN)
Η «ανάγνωση» της ηθικής του Αριστοτέλη από τον R.M. Hare
Δραγώνα - Μονάχου , Μυρτώ
The claim that nowadays Oxford is doing philosophy along with Aristotle can also be defended by the impressive and substantial presence of Aristotelian stances in the systematic work of the eminent moral philosopher R. M. Hare. In Hare΄s three influential books, covering thirty years of continuous elaboration of the theory of «rational universal prescriptivism», the view is moreover verified that the Nicomachean Ethics is a philosophical piece of work especially favourite at Oxford as «a text most in harmony with recent Oxford philosophy». Hare quotes Aristotle frequently and his references to him exceed in number those to all other ancient and modern philosophers. His well known meta-ethical theory can be viewed as a successful synthesis of the ethics of Aristotle, Hume and Kant with utilitarianism, and a translation into the modern idiom of traditional ideas in the analytic style. Although we should not speak of a certain influence exerted by Aristotle on Hare, as is the case with other analytical philosophers, Hare΄s reading of Aristotle in the context of his moral theory is particularly interesting as it presents the ancient philosopher to have anticipated some key-points of the prescriptivism advanced by Hare within the problematic of the meta-ethical concern with the logic and epistemology of morals. In the first and third book in particular, Hare appears discussing with Aristotle central moral and ethical topics, although in other contexts he is aware of the gap dividing ancient and modern modes of ethical thinking. He sometime appeals to Aristotle in order to validate his views. He translates Aristotelian expressions into his own idiom and develops Aristotle΄s argumentation to meet the modern problem. He borrows some of his illustrations adapting them to suit his context and has recourse to him to complete the theory he elaborated independently to confront intuitionism and emotivism. Thus, far from arguing that Hare got germs of his theory from Aristotle, I believe that we have here a happy encounter of two philosophers who, for all their differences in other matters, pointed out critically by Hare himself, held the common belief in the prescriptive character of the language of morals and the function of moral principles to guide conduct. This allowed a close approach to certain moral and ethical topics, such as the meaning and use of the term «good» in moral and non-moral contexts, the validity and function of practical syllogism, the role of decision and will and the perennial problem of moral weakness as well as the distinction of the several levels of moral thinking. Although Hare was able to see Aristotle as a sort of forerunner of his prescriptivism after he had elaborated his theory, i.e. from the viewpoint of his own ideas, in none of his numerous references to him has he biased the evidence to suit his interpretation. His Aristotle, although somewhat different from the Aristotle of most traditional histories of philosophy, is the Aristotle of modern analytical scholarship with some more personal features. Hare seems to me to have read Aristotle as perhaps the latter read the Presocratics, i.e. through the prism of his own theory, but in a positive spirit and with a feeling of partnership. And I am convinced that he read him correctly. In this article I have tried to follow Hare΄s explicit references to Aristotle in his books, The Language of Morals, which appeared in 1952, Freedom and Reason in 1963 and Moral Thinking in 1981, with a view to assess the extent to which Aristotle has actually anticipated universal prescriptivism.
Επετηρίδα
Αριστοτέλης
Ιστορία της Φιλοσοφίας
Ηθική
R.M. Hare
Αριστοτελική Φιλοσοφία
Academy of Athens
Research Centre for Greek Philosophy
1982
Text
Greek
English