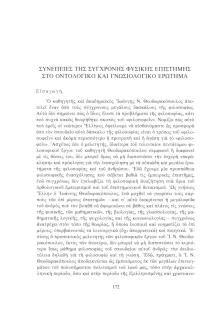 1991 - 1992 (EN)
Συνέπειες της σύγχρονης φυσικής επιστήμης στο οντολογικό και γνωσιολογικό ερώτημα
Παύλος, Γ.Π.
Our purpose in this work is to study the consequences of modern scientific knowledge, especially of modern physics in the philosophical inquiry. The basic and fundamental questions of the philosophical thought are summarized in ontology, epistemology and anthropology. As we shall try to show here three of the main areas of modern physics, relativity, quantum theory and chaotic physics, as well as their consequences for the knowledge of cosmos compose an important challenge for the modern philosophical process. The most important thing for which we begin to obtain a deep comprehension after the recent development of the natural sciences, is the complementary between science and philosophy. This is in contrast to the strict positivist and reductionist spirit of our modern civilization and of its philosophical presuppositions, after the european renaissance. The first Hellene philosophers with all their existence were nostalgics of the very real essence of beings, that is what is the being itself. In order to answer these questions they invented all the intellectual equipment much later was inherited by the Western European technological civilization. However Hellenes had the wisdom not to exhaust the Truth in the concepts about the Truth. This means that their civilization was in reality an open civilization. We believe that modern scientific knowledge in its three basic stages —relativity, quantum physics and chaotic physics— transport us to drastically new period and constitutes a peculiar continuation of Greek philosophy. Modern physics gives us strong indications that the cosmic reality is constituted of discriminated forms of existence, which cannot be reduced in a fundamental and final shapeless substance. That is we can refuse the mechanistic view that the definite cosmic beings are without their own hypostasis, coming from the transient formation of an eternal shapelles substance. While every individual existence can be analyzed in its elements, itself constitutes simultaneously an holistic, non-reductionable reality. Those cosmic forms are described by terms of matter and energy, while in addition now it seems that in a deeper level are forms of information and reasonableness. After this the cognitive process clearly consists of information transit and communication of biological neural or linguistic form. Also ontologically propabilistic character of quantum and chaotic processes make the cosmic becoming an extreme interesting and attractive process of chronical and historical character. The unpredictable emergence of ontologically new forms of existence is a continiously enriched novelty, calminated with the emergence of the human personal way of existence. If we identify the cosmic beings as their individual, atomic or personal form of existence, then in some way evolution we have their emergence from nothing or almost nothing. This is supported by the fact that quantum field theories permit the creation of elementary particles and all the universe from the quantum vacuum, that is shapeless, so non existent and absolute nothing. Simultaneously the quantum theory at the cosmological level (quantum cosmology) supports a new form of anthropocentrism, because among many possible universes, in reality we had selection of this one which could include the human observer and participant. Moreover the ontologically propabilistic character of the cosmic process indicates that this human participation can be effective for the cosmic evolution in its micro- and macrohistory. Yet the fact that it could be possible this universe not to exist or, instead of it, it could be possible to exist transiently another (others) universe(s) empty from the human presence, makes our universe an extreme and «agonizingly» interest affair. In other words, we could assert that this universe is no more no less our «body». Also the increasing importance of information and cognitive concepts for the scientific description of cosmos manifests the marvelous urgency of discoding the inherent cosmic information. So we can assert that cosmos with its natural forms of which it is constituted, is a calling out for participation in a cosmic dialogue. More over our scientific knowledge, in agreement with the epistemological conclusions of relativity and quantum physics, is a kind of relation between us and the cosmic beings that does not exhaust their deeper existence. This in the philosophical language means that we can know only the energies of beings but not their deeper essence. All of these characteristics which we think that can be concluded naturally by the study of modern physical sciences, reveal an all embrancing cosmic creating process with intense historical and novel enriching character, in contrast to the mechanistic aspect of scolasticism and of Renaissance. The culmination of the above described bracing cosmic creating process was the emergence in recent time (about -105 years ago) of the personal human beings. This human personal way of existence is also culminated to- our inner efficiency, and an existential erotic force to be unselfishly nostalgic of the presence of every definite human person which was alive in the past, is alive now and will be alive in the future. I would like to finish this paper in this way: The cosmological anthropic principle looks to me as the scientific interpretation of the following challenge: This universe for 20 billions years proceeds towards us, to every shelfishless erotic human being, which irrevocably feels nostalgic to the presence of every other personal existence. This magically wonderful, precious and irreplaceable treasure repeatable uniquely to every one of you, which we wish to meet eternally in the Land of alive persons. In the Land where every other is our real truth and gladness.
Επετηρίδα
Φυσική
Συστηματική Φιλοσοφία
Οντολογία
Γνωσιολογία
Academy of Athens
Research Centre for Greek Philosophy
1991-1992
Text
Greek
English