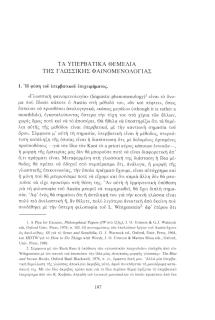 1991 - 1992 (EN)
Τα υπερβατικά θεμέλια της γλωσσικής φαινομενολογίας
Αντωνόπουλος, Κ.
«Linguistic Phenomenology» is the name Austin once gave his method. I argue that the structure of this method is transcendental, in the way Kant understands this term (or, rather, the way Austin says that Kant understands it.— «Are There A Priori Concepts?»). What, according to this definition, is peculiar to a transcendental approach is its persistence on well tried and commonly accepted practices and its correlative distrust towards attempts at changing them fundamentally. «If the criticisms leveled against such practices were justified», the transcendentalist points out, «then we would not be able to do what we do in fact do». This is as true of Austin as it is of Kant. Regarding Kant, this is revealed in his reaction to the Humean analysis of causality. If Hume were right about causality (and the nature of our experience as a whole), Kant relfects, then we would not be able to do the very thing we have already been doing for so long and with such success, namely create exact physical sciences of predictive and explanatory content. (And technology, which Kant ignores. What is, for instance, Hume΄s explanation of the successful performance of an engine, viz. of its property to function and produce as expected? Would it be meaningful to maintain that such success is irrelevant to the presence or absence of a causally structured world and the justification of our belief that this must be so? Then what would «success» mean?). And, at a more primordial level, we would not even have the very type of experience which we seem to have nor the kind of common sense which we seem to have. Regarding Austin, his transcendetalism is revealed in his two railing tendencies; his conservatism and his normative conception of language (of which tendencies, he would freely confess only to the latter). Austin΄s well noticed (but wrongly received) conservatism is exemplified in his reluctance to endorse essential conceptual changes in the body of language (what is often referred to by the technical terms «extension of a predicate» or «meaning variance») and is embodied in his well known Principle of Natural Selection in respect with language: «The forms of speech which have survived are the fittest, the most efficient, forms of speech» (Three Ways of Spilling Ink). Such patterns of speech «have stood up to the test of the survival of the fittest». (A Plea for Excuses). So they΄re entitled to our respect. This response is thoroughly transcendental. It is conservative qua being transcendental, just as much as Kant΄s equally conservative response to Hume΄s casual reformism also was, and for the very same reasons. The core of transcendental argumentation is epitomized in its faith in ordinary, commonplace, and for that very reason fairly unproblematic, practices, which the reformist (who is, in fact, a kind of sceptic), will not rest until succeeding to undermine. Austin΄s attitude towards established linguistic usage (forms of speech) is hardly any different from Kant΄s own towards an established, intersubjective, value of causal reasoning. Finally, we come to the issue of normativity. Correct speech (and its philosophy) involves awareness of «what we should say when» (A Plea for Excuses), viz. of what rules (conventions) to apply and of what occasion warrants their suitabilibility. (A similar normativity has been —allegedly— discerned in Wittgenstein΄s «language games» but those, at best, only avail us with a curtailed, local, normativity, a true mockery of normativity properly so-called. Genuine normativity is universal and allows of no alternatives on what to say). Combined with Austin΄s Principle of Natural Selection, not at all surprisingly, awareness of «what we should say» yields the optimistic (perhaps too optimistic) result that «in the very long run» (Three Ways...) what we do say coincides with what we should say. This which we ought to do, we cannot but eventually come around to having to do (linguistically or otherwise). Or pay the price. For Austin, then, ultimately language cannot go wrong. As indeed, for Kant, conception cannot. It is this which gives linguistic philosophy, the method of extracting objective truths from our firmly established verbal practices, its purpose and justification. Whether this is done by paying attention to concepts, as is the case with Kant, or by paying attention to words (communicable concepts), as is the case with Austin, then becomes a matter of convenience. The profoundly conceptual origins of linguistic philosophy (and Austin΄s philosophy is predominantly conceptual in its own right) may justly cast new doubts concerning the authenticity of its putative empiricist birth certificate. Its inherent conceptual drive immediately commits it to metaphysics. But then, as is to be expected, there is yet another reason for this. There is really no reason to turn to language for the discovery of purely physical truths, which we can discover by other, and more appropriate means, in any case.
Επετηρίδα
Γλώσσα
Συστηματική Φιλοσοφία
Φαινομενολογία
Academy of Athens
Research Centre for Greek Philosophy
1991-1992
Text
Greek
English