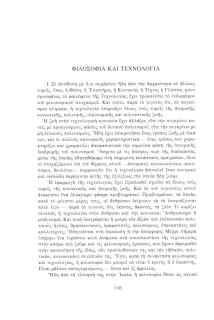 1991 - 1992 (EL)
Φιλοσοφία και τεχνολογία
Τζαμαλίκος, Παναγιώτης
In contrast to what has happened with other fields of Philosophy since Antiquity (such as Nature, Science, Society, Ethics, Art, Language) Technology has come under the focus of Philosophy only recently. And this, despite the fact that Technology affects every aspect of human life in a worldwide scale. Nevertheless, nowadays there is a gap between the importance of technology itself to human life and the number of philosophical treatises devoted to this. So, in the encounter of Philosophy and Technology, Philosophy cannot be the judge; rather this is the defendant, even by negligence. During all human history, Technology has always been regarded as a natural facet of human existence, as a sort of extension of human being. In fact there was a unity between Technology and human being itself, since the former was an authentic manifestation of humanity in its relation to the world. The problem in our days, however, consists in the fact that this unity has been broken. Which creates the necessity of a new approach to the phenomenon of modern Technology and its manifestations. Technology has been existing in all the eras of human history and prehistory. However, it is only in modern times, that this has become a problem. Besides, it is not possible to consider it as one of the systems comprising the world; the case of certain monks aside, it is not possible to get out of this and settle in a region where Technology does not exist, and study the phenomenon from there. Technology permeates every aspect of life. Like nature, it is a ubiquitus reality, a sort of substitute of nature itself. The problem is though that this reality appears to be alien and anonymous, determining human life relentlessly and decisively. Philosophical enquiry of these problems then is not really a matter of choice. For study of the phenomenon itself and the consequences of Technology (social, political, ethical, economical) is an imperative prerequisite for comprehending what comes to appear as modern life. What can Philosophy have to do with this reality? Is it possible that the pressing and urgent problems of today may find their solution through Philosophy? It could not be surprising if this ambition of Philosophy were treated with scepticism. Will it be Philosophy who will suggest how to face problems emerging from modern technological reality? But, it could be argued, it is philosophy which has been unable to provide definitive solutions to its own internal problems. Is it not rather the case of Philosophy being the activity which creates rather than solves difficulties? And if Philosophy were allowed to deal with complex matters of today, is it not probable that this activity will degenerate in endless discussions — at a time when what is most needed is quick and effective action? This though is the attitude taking Philosophy to be but mere observation of things, out of which it exhausts itself in endless theoretical speculations. Which means that Philosophy is but the manifestation of impotence and ineffectiveness. This is very essential. For today΄s most pursued requirement is effectiveness. What is required from a modern technician is to invent the most effective way, in order to realize a goal which has been determined in advance. It should be added that, in our days, this effectiveness normally points to the scale of quantity. However, if now there is a problem, this is not due to lack of means and energy. Never before has man made available to himself so many goods, so many weapons, so much energy. The question though is: Can man master them? By this it should be understood the ability to apprehend them through a global logic, which will direct their use through criteria, reasons and limitations serving a certain final goal in terms of Philosophy of History. This is exactly where the role of Philosophy is indispensable. For these broader considerations are in fact beyond the scope of Technology itself. It is Philosophy that establishes the reasons of everything end thus provides the desired direction of the course of history.
Επετηρίδα
Συστηματική Φιλοσοφία
Τεχνολογία
Ακαδημία Αθηνών
Κέντρον Ερεύνης Ελληνικής Φιλοσοφίας (ΚΕΕΦ)
Άρθρα του περιοδικού "Φιλοσοφία"
1991 - 1992
Κείμενο/PDF
Ελληνική γλώσσα
Αγγλική γλώσσα