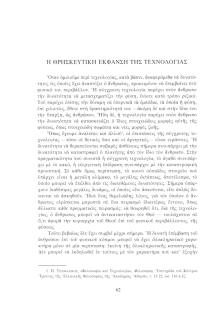 1993 - 1994 (EL)
Η θρησκευτική έκφανση της τεχνολογίας
Τζαμαλίκος, Παναγιώτης
The question pondered upon in this paper in whether science and technology could be claimed to be a sort of religion. In order to answer this, it is necessary to define what in fact constitutes the religious character of a certain manifestations of human life outside the action and function of religion per se. That is, in what sense and in what respect, apparently non-religious actions, institutions and symbols could in essence have a religious character and function. The conditions for this to happen are, fist, a conception of religion as a dimension, rather that a sphere of human being; secondly, a quasi-religion should be understood within secularism; thirdly, this should be distinguished from pseudo-religion; and fourthly, this should encompass a transcendent ideology. Given these, it is not in fact science, and technology that could be seen as religious forces today. It is rather a distorted conception and function of the, appearing as scientism and technisism. Only in this respect science and technology qualify as quasi-religions. The difference between science and technology on the one had, and scienticism and technicism on the other, is the difference between an autonomous element of the whole which remains in relation to other elements, and one element gaining precedence over all others. In this respect, other realms, such as religion or art, lose their autonomy and can be taken as only subjects of scientific analysis and technical manipulation. As quasi-religions, scienticism and technicism draw all reality into the terms of their understanding. This is, however, what reveals the daemonic character of such a deification, since a particular element of existence is elevated to the whole. This conception, however, is fundamentally imbued by a profound inconsistency. A comparison with Christian faith, expounded in this paper, reveals this. Christianity has in fact a coherent conception of cosmology, a soteriology, a concept of creation, of theodicy, an eschatology. But if, within the frame of scienticism and technicism, the world is deprived of any absolute meaning whatever, the to be asked question is: if this world has no meaning, why should technology improve it? In this framework, notions such as truth, justice or morality are reduced to mere illusions; they are seen only as projections without inherent value or reality, conventionally respected only for the sake of maintaining a certain social structure. But a search for the non-existent internal coherence of these quasi-religions reveals their real character, which is one of an arbitrary and uninspired faith: forces which merely tend to swallow up both creation and meaning in the threat of complete annihilation. Lacking any inherent consequence, their be¬liefs are of a totally fragmentary and inconsistent character — and this is why they should be resisted, before their untimate consequence (that is, sheer destruction of nature and establishment of spiritual absolutism over other human functions superior to them) reach the edge of realization.
Επετηρίδα
Θρησκεία
Συστηματική Φιλοσοφία
Τεχνολογία
Ακαδημία Αθηνών
Κέντρον Ερεύνης Ελληνικής Φιλοσοφίας (ΚΕΕΦ)
Άρθρα του περιοδικού "Φιλοσοφία"
1993-1994
Κείμενο/PDF
Ελληνική γλώσσα
Αγγλική γλώσσα