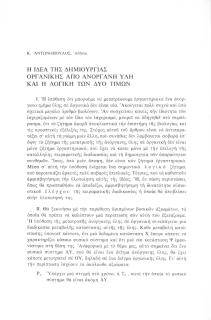 1985 - 1986 (EN)
Η ιδέα της δημιουργίας οργανικής από ανόργανη ύλη και η λογική των δύο τιμών
Αντωνόπουλος, Κ.
Aristotle΄s classical distinction between opposition and contradiction rests on the fact that two opposite predicates cannot both be true but can both be false (e.g. short/tall), whereas two contradictory predicates can neither be both true nor, however, both false (e.g. dead/alive). Two opposite predicates can both be false, because a third alternative, existing in between the two extremes, is always possible (e.g. of middle height). No such alternative exists between truly contradictory predicates; the two states to which the contradictory predicates are attached are the only ones possible and no intermediate state between them is conceivable. The Law of the Excluded Middle applies exclusively to contradictory predicates. The article discusses the relation between the predicates «organic / inorganic». As all matter is either of the former or of the latter category, no intermediate state being allowed between them, at least semantically, it follows that these two predicates are contradictory. This being the case, what can we rationally expect of a sample of inorganic matter, which is experimentally put through the process of being transformed into organic? It stands to reason, of course, that this piece of matter must stop being inorganic, if it is to become organic. But as there is no intermediate state conceivable between these two (contradictory) states, what state is this piece of matter in, just after it stopped being inorganic and just before becoming organic? In accordance with the preceding remarks, this piece of matter is neither inorganic nor organic. As a consequence, both of the contradictory assertions, «this piece of matter is inorganic)) / «this piece of matter is organic», are just as false, contrary to what the Law of the Excluded Middle demands. Thus, either the experiment is possible, in which case the Law of the Excluded Middle is itself false (a most peculiar fate for a Law of Logic), or, conversely, a transition of matter from inorganic to organic state should be impossible instead, as the Vitalists have been claiming all along. As a third possibility, one may assume that the process of transformation will be accomplished, but even then, the piece of matter undergoing it, after ceasing to be inorganic and prior to becoming organic, must be assumed to be in no physical state whatsoever, a fact which implies that the experimental process is not really under the experimenter΄s control.
Επετηρίδα
Ανόργανη ύλη
Βιολογία
Οργανική ύλη
Συστηματική Φιλοσοφία
Academy of Athens
Research Centre for Greek Philosophy
1985-1986
Text
Greek
English