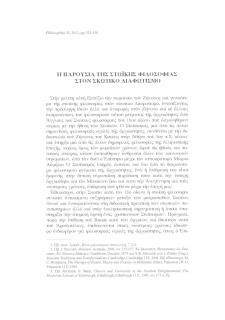 2012 (EL)
Η παρουσία της στωϊκής φιλοσοφίας στον σκωτικό διαφωτισμό
Γλυκοφρύδη-Λεοντσίνη , Αθανασία
The presence of Stoicism in the Scottish Enlightenment is attested since the beginning of 18th century, but is most eminent after 1740, when some academics and clerics opposed Hume's scepticism as expressed in his Treatise of Human Nature (1739-40). In 18th century Scotland, Stoicism is a subject of discussion amongst moderate Scottish literati and is incorporated into the teaching practices of the Scottish Universities, but also into the ecclesiastical sermons that advocated the personal virtue of Christian Stoicism. For the reception of the Stoic ideas, Seneca, Epictetus and Marcus Aurelius were used as primary sources, while Cicero, Plutarch, Diogenes and Simplicius as secondary. The moral ideas of Zeno of Citium and later Stoicism influenced Francis Hutcheson, Professor of Moral Philosophy at the University of Glasgow and George Turnbull, Professor of Philosophy at the University of Aberdeen. Both Professors stressed Christianity's compatibility with Stoicism and influenced with their teaching Scottish moral theory. Stoic ethics was also influential to moderate Edinburgh literati, such as Adam Ferguson and Hugh Blair, but mostly to Adam Smith's moral theory. Adam Smith formulated a moral theory based on the concepts of the «moral sense», «moral judgment», «sympathy», and that of the «impartial spectator». Stoic influences are obvious in his views on duty and propriety, the latter being identified with Cicero΄s sense of duty or decorum. Smith also incorporated into his theory Stoic views on cosmopolitanism and nature's cosmic harmony, while his views on the «impartial spectator» formulate an original theory based on Stoic views. Smith also criticized «Stoic apathy and indifference» which he rejected, as did their views on suicide, and commented on their view that reason prevails into passion by recognizing the role of the sentiments in the context of moral judgments. Nevertheless, David Hume was critical to Stoicism and was led into Scepticism via the study of Cicero, while his objections to both Stoic and Christian thought were grounded on their support to reason and the negligence of emotion. In his Essays, Hume is critical to apathy that many ancient philosophers advocated and to the harshness they imposed on themselves; he is also critically contrasting Stoicism to Scepticism since the first advocates while the second suspends «the supine indolence of mind, its rash arrogance, its lofty pretensions, and its superstitious credulity».
Επετηρίδα
Ιστορία της Φιλοσοφίας
Στωική Φιλοσοφία
Σκωτικός Διαφωτισμός
Ακαδημία Αθηνών
Κέντρον Ερεύνης Ελληνικής Φιλοσοφίας (ΚΕΕΦ)
Άρθρα του περιοδικού "Φιλοσοφία"
2012
Κείμενο/PDF
Ελληνική γλώσσα
Αγγλική γλώσσα