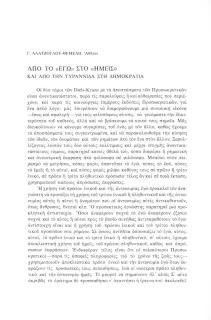 1985 - 1986 (EL)
Από το «Ἐγὠ» στο «Ἡμεῖς»
Αλατζόγλου-Θέμελη , Γραμματική
Reading over Die Fragmente der Vorsokratiker by Diels-Kranz, one no¬tices that the earlier Presocratics, when expressing their personal views, use the first person singular and the pronoun I, while the later ones use the first person plural plus the pronoun «we» or any equivalent impersonal form. The former also use the pronoun «he» or «they» and the corresponding third person singular or plural, when they refer to the «mortals», i.e. to the common people, besides they feel distant and superior from the common people and show contempt for them. On the contrary, the latter do not make any distinction between the common people and their own wise ego; they feel equal to the «mortals» and express themselves in the first person plural, or in impersonal form; they generally speak in the name of everybody and not in the name of a few wise men. Xenophanes, Heraclitus, Parmenides and Empedocles are included in the first group, the «philosophers of 1», while Zeno, Melissos, Anaxagoras, Diogenes of Apollonia and Democritos to the second group, the «philosophers of we». Xenophanes is the most moderate of the «philosophers of 1» while Heraclitus is the most haughty. Parmenides and Empedocles, in expressing themselves poetically, are not directly lofty, but in reality they are as haughty as Heraclitus. The scenery changes with Zeno; it is Zeno who first abolishes the first person singular and the pronoun I, and makes use of im¬personal forms. With Melissos the first person plural is established. For the first time in Presocratic Philosophy Melissos says «we», i.e. he stops to differentiate his wise ego from the common people. Anaxagoras, Diogenes of Apollonia and Democritos go on to expressing themselves similarly. It is clear that the «we» bridges the distance between the «1» and the ((they», between the wise ego and the common people. It is remarkable that many mythical and mystical powers, deified entities or personified conceptions like Dike, Furies, Philotes or Aphrodite, some virgin goddesses or Muses are still to be found in the «philosophers of 1». On the other hand any mythical or mystical powers are entirely absent in the «philosophers of we»; abstract concepts are never personified by them, and their cosmologies are absolutely rationalized, mechanized and causally determined. This course of Presocratic Philosophy «from I to We» might be considered as moving parallely to the course of the greek city-state from Tyranny to Democracy. Our Philosophers transubstantiate the reality in which they actually live into ideas expressed in nouns and verbs. While Tyranny is at the acme of its glory, during the 6th century B.C., the Presocratics express themselves in the first person singular, and emphasize the superiority of their ego, which corresponds to the ego of the Tyrant; the first one is a wise ego, the second a powerful one. As Tyranny retreats and Democracy becomes the established order of things, the first person singular retreats as well, and «1» gives way to «we». In about the middle of the 5th century B.C., the Presocratics, with the exception of the eccentric Empedocles, do not keep the common people at a distance any more; they think they are members —perhaps prominent ones— of a community and they try to learn and to interpret the universe. They recognize the other members of the community as equal to them —we— not as foolish mortals — they.
Επετηρίδα
Ιστορία της Φιλοσοφίας
Τυραννίδα
Εμείς
Πολιτική Φιλοσοφία
Δημοκρατία
Εγώ
Ακαδημία Αθηνών
Κέντρον Ερεύνης Ελληνικής Φιλοσοφίας (ΚΕΕΦ)
Άρθρα του περιοδικού "Φιλοσοφία"
1985-1986
Κείμενο/PDF
Ελληνική γλώσσα
Αγγλική γλώσσα